A few years ago, I realized there was a plant growing along the chainlink fence at the back of our yard. This section of the fence is hidden from view of our house by our shed, and so the growth of the plant had escaped my notice. Of course, each week as I mowed the lawn, the plant got a little larger, until one day it impeded my attempts at trimming and mowing along the fence. By this time, it had grown to be about as tall as me. Still, I ignored it.

The plant is an invasive breed of honeysuckle and had to go. By chance, my neighbor on the other side of the fence was working in his back yard. We conversed about the bush and both agreed that it would be best if we tackled its removal together. At separate times, we both did what needed to be done.

As I set about trimming back the long tendrils of the bush, it became apparent that this bush would not be easy to remove. Limbs were intertwined with the fence, so much so that it was impossible to remove them. I had to snip the ends and leave the part that had wrapped itself around the chainlink.

A sunburned neck and scratched hands later, my neighbor and I were mostly successful at removing the invasive honeysuckle. As spring has arrived, however, the plant has begun to sprout and grow again. It seems our battle is not yet over.

I think there are several similarities between my struggle with this viney plant and some volunteers in the church. Choosing the wrong volunteer can have serious and long lasting consequences, and if they are not dealt with in a timely fashion, can lead to serious conflict. What’s to be done with a toxic volunteer?

First, you need to be certain that the volunteer in question is really the problem. Look for patterns of behavior. Then, speak gracefully with the individual about it. Offer help and accountability in the best way you can. If the volunteer does not respond favorably, follow Jesus’ example in Matthew 18 and invite another godly individual who understands the situation to join you in speaking with the person. Always do this with grace and hope in the power of Christ to transform people’s lives and behaviors.

If the volunteer has not responded positively and the behavior continues, you must act decisively. Make a plan with the pastor that supervises you. Explain the situation and the steps you have already taken. A toxic volunteer must be removed, at the very least on a temporary basis. If you do not remove a troublesome volunteer, they will entangle themselves in your ministry like the invasive honeysuckle plant, and it will become even harder to remove them.

Pruning a toxic volunteer is never a one-person job. You need, I say again, you NEED the support of your supervisory pastor and whatever council or committee that helps oversee your ministry. If you do not work as a team, there is a good chance that you will end up bloodied and defeated. In the worst-case scenario, it might be you who ends up leaving.

If others are unwilling or unable to support you, you just might be in an environment which has been dysfunctional for a very long time. As a staff person, there is little that you can do to change the culture by yourself.

Of course, this whole process needs to be bathed in prayer. From recruiting to training to asking a volunteer to step aside, prayer is vital.

There also must be a good deal of self-reflection.

Anytime there is conflict, we must always ask ourselves what part we played in creating the environment that gave rise to the conflict.

This is a tough step, and it may be painful as you might come to the realization that you are partly to blame, but it is crucial. Is there something you said or did that caused the volunteer to act in toxic or destructive ways? If there is, it can be cleared up, but not if it’s left to grow wild and unchecked.

Don’t Let It Dominate You

You may find that the problem is far larger than a single person. It is unfortunate, but at times the social dynamics and systems of a church lose sight of our primary disciple-making mission. Like the honeysuckle in my back yard, you may trim one volunteer only to have another grow back in its place. It may seem like a losing battle, and if the conditions are right (or wrong!), it just might be. It can be soul sucking.

The church needs you as a minister of the Gospel to students and their families. You must not let dealing with troublesome volunteers or systems suck the joy of ministry out of you. As Nazarenes, we are a hopeful bunch. We have an optimism that is rooted in grace. You have been called. You have been equipped. The God who called you will sustain you. 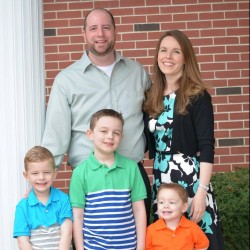 Jason Buckwalter
Jason is an ordained Elder in the Church of the Nazarene, has served in a variety of youth ministry roles, and is an avid fan of books and baseball.